The feud between the famous singers, Taylor Swift and Katy Perry, has been one of the most talked about controversy in the Hollywood. This feud started over 5 years ago and was going on ever since, though now it seems that the Hollywood stars are back on terms again.

Taylor Swift released a new music video, “You Need To Calm Down”, in which Taylor and Katy were seen hugging each other, dressed as literally Burger and French Fries, and those two things will always complement each other.

Lets talk about the history of the feud between the Hollywood stars and try to recap what started it, how it developed and how it finally came to an end. Starting from the beginning, when Taylor Swift and Katy Perry were dear friends. It was 2009, both stars used to hang out and have fun with each other and even perform duets on their tours. Both were fond of each other as their tweets from that year included Taylor saying “…I love Katy Perry. I think I’m going to hang her poster on my wall now.” and Katy replying with “You’re as sweet as pie! Let’s write a song together about the subject we know best…for my new record. It’ll be brilliant.” So yes, they were definitely friends back then.

So what exactly could have happened between the two that they continued their feud for 5 long years. Well, two such situations occurred that caused the bad blood between the singers. Some people speculate that it all started in 2013. To understand what happened in 2013, we need to go back a few years back to Taylor Swift’s Fearless tour in 2009. In her incredible tour, Taylor Swift performed amazing duets with Katy Perry as well as John Mayer. It was rumored that John Mayer and Taylor Swift were dating but nothing was confirmed. Though, an year later Taylor released a song “Dear John” with the lyrics “It was wrong, don’t you think nineteen’s too young to be played by your dark, twisted games when I loved you so.”. We definitely think that the John she was talking about was John Mayer. Well, a couple years go by and now in 2013, Katy Perry posted a picture with John Mayer and they were obviously getting close to each other. This might be the time that the conditions between Taylor and Katy started to get bad.

Well, if that was not the start, 2014 definitely was. Taylor was the pop star of the time and was on her world tour, the Red Tour. She decided to hire three dancers that originally worked for Katy Perry and took them with her on the tour. A couple of months go by and Katy Perry started her own world tour while the Red tour was still on. The dancers Taylor hired reportedly talked to Katy Perry and left Taylor’s tour mid-way and joined Katy’s Prism tour. This is the time that the situations really worsened. In her next album, Taylor released the famous song about her feud with Katy, Bad Blood. Moreover, Taylor while talking to the Rolling Stone Magazine said that Bad Blood was written due another female pop star, who was now her “straight-up enemy” due to the horrible stuff she did. We are pretty sure Taylor was talking about Katy here as she further added “She basically tried to sabotage an entire arena tour. She tried to hire a bunch of people out from under me.”

After the comments from Taylor were published, Katy Perry tweeted “Watch out for the Regina George in sheep’s clothing…”, definitely throwing shade at Taylor. For the next 3 years, the feud continued and both passing comments about each other here and there.

Well it was in 2017 that Katy, while on Carpool Karaoke with James Corden, said “She started it, and it’s time for to finish it…”. This was the time that things finally started to cool down for the Hollywood stars. Katy in a 24-hour live stream on YouTube also apologized to Taylor Swift. In the same year, during an interview Katy said “…I forgive her, and I’m sorry for anything I ever did, and I hope the same from her, and I think it’s actually – I think it’s time.”

In 2018, Katy Perry extended an Olive Branch to Taylor Swift, literally. She sent Taylor an actual olive branch to finally end the beef that has been going on for years now. Taylor then shared a video of the gift and appreciated the gesture from Katy.

And now finally in June 2019, Katy posted a photo on her Instagram that had a plate of cookies with “Peace at last” written on top, she tagged Taylor Swift in the post and wrote “feels good 🧡 “. This meant that the 5 year long feud was finally over. This was made more obvious in the new music video from Taylor Swift, “You Need to Calm Down”, where Katy and Taylor were hugging each other and showing everyone that they are finally friends again. 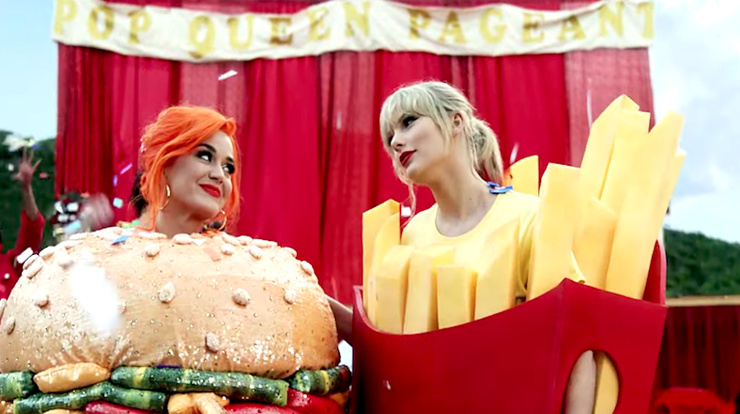 Sonus Complete is a potent formula for all the people searching for a solution to overcome tinnitus.